The rich Hindu pantheon of Gods and Goddesses is astounding; each persona harbours
an ocean of divine qualities and powers.

With the ongoing spiritual journey, I was enlightened, awakened and now becoming the Ganesha- Vighna Vinashak(destroyer of all obstacles) of my life. Now Lord Shri Ganesha is no more just an Indian mythological Lord for me, it has become one of the virtue within me.

Since childhood, I am seeing the worship of the Lord Ganesha as a good omen at the beginning of every task and I have always considered him as one of the lords who is a Lord of Knowledge among many Indian Lords. But the practice of Spirituality has taught me that Ganesha symbolizes as “Vighna-Vinashak(destroyer of all obstacles), the wise soul and Siddhi Vinayak(the harbinger of success)” and every one of us must learn to become like him.

The belief that spirituality, meditation, value education etc. are not for the average person,
is untrue. As our thoughts, decision-making powers, emotional intelligence etc. are real (albeit subtle energies), we definitely need to enhance our spiritual side if we aim to be successful in life. Lord Ganesh’s birth, characteristics and powers are nothing short of an encyclopedia in spiritual maturity – a power needed by all.

In this blog, I will share what all I have learnt from the character of Lord Shri Ganesha and how I am practising all those virtues to become one like him.

The story of the birth of Lord Ganesha is incomparable to any other birth in history where… “Ganesh is created from the dust of his mother’s body (Goddess Parvati). A misunderstanding results in a feud between him and Lord Shankar. Although Ganesh fights courageously, Lord Shankar severs Ganesh’s head off during the battle. Overcome with grief, Goddess Parvati implores Lord Shankar to restore Ganesh’s life, and therefore He attaches the head of an elephant onto Ganesh’s body, giving him new birth. Lord Shankar blesses him, in particular, with the eternal fortune of being worshipped before all other deities and title of Vighna-Vinashak”.

Why would a father (the Lord of the Universe no less) kill his own son, despite the son’s
ignorance and arrogance? Why couldn’t have Lord Shiva re-attached Ganesh’s original head?
Enchanting as the story may be, the spiritual significance is more beneficial: Residing in a body made of the five elements, we souls, children of the Supreme Being, the Incorporeal God Shiva, forgot our true parents and began to associate with the body and physical world.
It is God’s mercy that He severs off this false head of ego and gives us a new, spiritual birth.

The elephant-headed deity, Ganeshji, symbolises the beautiful qualities of a knowledgeful, spiritually enlightened person, for example: –

Elephants are praised for their sharp memory and intelligence.  Just as an elephant maintains its self-respect amidst all other creatures, a wise man can also learn to maintain a stable and steady intellect when confronted with adverse situations. The large elephant’s head symbolizes a broad and wise intellect, attained through the accurate understanding or Divine Knowledge given by God.

The elephant trunk can do anything from uprooting trees to picking up a needle. Similarly, one can develop the power to uproot deep-rooted negative traits/attitudes, and impure habits and weaknesses, that obstructs his path to spiritual upliftment.

The elephant’s tiny but sharp eyes

The elephant can see the smallest of good qualities within anybody – small things appear big in the elephant’s vision. A spiritually wise person only sees greatness in simple things and concentrates on others specialities, rather than their weaknesses. Such souls are humble and give respect.

The elephants’ huge ears are most sensitive; a single Ant caught in its ear can trouble it to death. We too need to know what to hear, imbibe, and what to be indifferent to. The one who is wise of hearing knows the art of having the patience to listen, to understand others. We must use the power to listen carefully and discard any unnecessary gossips and rubbish.

The elephants’ large stomach signifies the art of not spreading gossip, negativity, secrets etc. – the ability to BUILD BRIDGES AND NOT WALLS. The huge belly depicts one who always has an adjusting or accommodating nature like the ocean, which never complains in spite of any rubbish that the rivers dump into it. Or one who is indifferent to insult or praise, defeat or victory, defamation or praise, loss or gain.

Balancing spiritual and physical lifestyles is no doubt the greatest challenge. But, armed and protected by ‘spiritual weapons’ given by God the Almighty during meditation, one finds this impossible task made possible.

The 4 arms of Lord Ganesh symbolise these gifts:

Axe – use spiritual knowledge to cut off attachments to the old impure world, deep-rooted weaknesses etc. Ganapati is also shown displaying one tusk, which symbolizes the protection, or a shield from evil influences through the direct link with the Supreme Source.
Rope – bind oneself in spiritual love for God and other fellow beings, so that relationships are nurtured with virtues
Modak (sweet) – accept, that becoming morally strong in a negative environment requires
tolerance and adjustment. Modak also signifies victory over the vices and total control over the sense organs – sweetness is thoughts words and deeds – thereby bringing sweetness in relationships.
Blessing Hand – A wise person always shares vibrations of peace, happiness, and good wishes with others.

Imbibing this knowledge and practising these virtues have really empowered me to destroy the various obstacles of my life. Now, Lord Ganesha is not just a mythological Image to worship but a complete enlightenment of knowledge to live with.

6 thoughts on “The journey of becoming Ganesha(destroyer of all obstacles) of my life.”

©2017 fromroopalismind.wordpress.com. Unauthorized use and/or duplication of this material, including written content and personal images, without express and written permission from this site’s owner is strictly prohibited. Excerpts and links may be used, provided that full and clear credit is given to fromroopalismind.wordpress.com with appropriate and specific direction to the original content. All rights reserved. 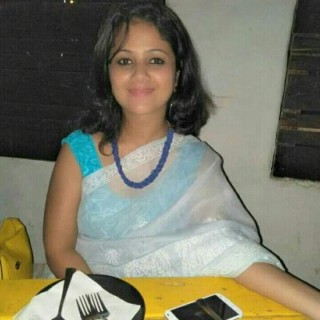 She is a daydreamer​ and a night thinker. She is a Doer. She Sees an opportunity in every problem, she faces. She has a great foresight and can see things much too far. Her curious mind is stretched by all the experiences life throws her way and what she makes out of them. She is sunshine mixed with rain, creating a beautiful rainbow. There is no lie in what she does.